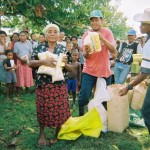 It’s hard to imagine life could be any more difficult for the Miskito Indians living along the banks of the Rio Coco River. But late August and September are some of the most difficult months for them to survive. What little food supply they might have had has long been exhausted and the rice harvest (for those with seed to plant) won’t be ready until October. It’s a time when starvation and malnutrition take their highest toll. But this year was to be different. This was to be the time the Lord had appointed to demonstrate His love and mercy to these precious souls.

Many months earlier the Lord had implemented His plan as 42,000 lbs. of rice was donated to Messiah Project for the Rio Coco. Already underway was the printing of 2,000 boxes of evangelical scripture booklets and Bible studies in Spanish and Miskito Languages by World Missionary Press. God’s timing was perfect as the two different shipments (the 40 ft. container of rice and 20 ft. container of literature) cleared Nicaragua customs within days of each other.

As the rice and literature arrived at our facility in Waspam, preparations were made for their distribution.  Six trips were made using our large dug out canoes carrying 7,000 lbs each trip.

The heavy rains had caused the river to overflow its banks flooding some of the villages. These villagers came by small boats to receive the Word and the rice. By the end of the last trip, 30 lbs of rice per family had been given to over 1260 hungry families in all 13 villages of the lower river.

Each trip was so special as the Spirit of the Lord shattered the looming sense of hopelessness and despair. The people received the preaching of the Gospel and the scripture booklets with great joy. In every village the response was the same. They gave God the glory saying “only God could have known how hungry we were and how much we were suffering”.

Through this outpouring of God’s love, the doors for intensive evangelism have been nailed wide open. Everywhere we go to preach we are being received with open arms and ready hearts. To God be the glory and honor. 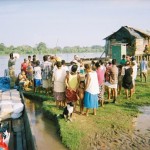 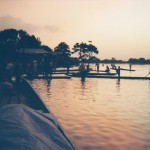 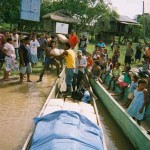