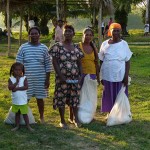 Psalm 100:5 proclaims, “For the Lord is good; his mercy is everlasting; and his truth endureth to all generations”.

This portion of scripture was so overwhelmingly evident in February’s trip down the Rio Coco. With the curse of hunger and malnutrition ever present, the Lord in His goodness, once again demonstrated His love and mercy to relieve the suffering of His people.

Through the generosity of a small group of brothers and sisters from the Houston area, we were able to purchase and distribute 3,200 lbs. of rice and 2,400 lbs. of seed corn. In the two village where the food shortage was the most critical, 160 families received 20 lbs of rice.

The villagers gathered to give thanks to the Lord for both the physical and spiritual food as the rice and Scripture booklets were distributed. Many mothers with not food for their children were truly blessed that day.

The 2,400 lbs. of corn seed was re-bagged by our staff  into 2lb. bags for distribution. They then delivered 2 lbs. of seed to 1,200 families in 11 villages. One pound of seed will plant an area about 82 feet square. It’s our prayer that the Lord will bless the harvest and in three months every family on the lower river will have some food as well as seed to plant again.

Through this demonstration of God’s love and the preaching of the Gospel message, another long time “sukia” (practicing witch) named Fidelia  prayed to receive Jesus. We Praise the Lord, for it was only one year ago that Fidelia was instrumental in organizing a large group from the village with the intent of killing us. Their plan was to call us to a meeting when we arrived in the village. Then once at the meeting, they were going to tie us up and throw us in the river to drown…. all four of us!  The day after we arrived in the village we were called to the meeting but what they hadn’t planned on was the power of the Holy Spirit that filled the room that day. Not long after the meeting started, one by one the villagers began to stand up and for no “apparent” reason started leaving. Within four hours they had all peacefully left so we got up and walked out of the room…. So this trip when Fidela came to us with tears streaming down her face, we were blessed beyond measure that the Lord allowed us to be the ones to lead her to Him.

Now, the joy that only Jesus can give shines from Fidelia’s face. 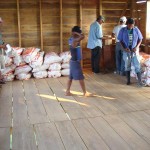